“I know a lake where the cool waves break,

And softly fall on the silver sand –

And no steps intrude on that solitude

And no voice, save mine, disturbs the strand”

Such is the description given by Fitzjames O’Brien of the beautiful Lough Hyne which was the first port of call for the RTAI group, who enjoyed a wonderful two days of walking and talking in stunning West Cork.  While the weather was inclement on the 7th of May for our first walk, it didn’t dampen the enthusiasm or enjoyment of anyone.  This was a looped walk which headed from Lough Hyne to Barlogue Beach and back again and took 1.5 hours.    For those who stayed overnight in Baltimore, a wonderful meal was had in The Waterfront Bar with all looking forward to our trip to Cape Clear on the Wednesday.

Fortunately, the weather proved friendly as 38 explorers headed out of Baltimore Harbour to one of Carbery’s  100 isles.  We were greeted by Diarmuid O Drisceoil who lead the group on an historical guided tour of the island which lasted for 4 hours.  History is often described as the extraordinary stories of ordinary people;  this perfectly described the tour given by Diarmuid as he took us through the history of the island as lived by ordinary people especially members of his own family who originated from the island.

On leaving Cape Clear and heading back into Baltimore Harbour, all were agreed that the trip was most enjoyable and informative and that the arrangements made by Clare Shelley facilitated a wonderful few days. 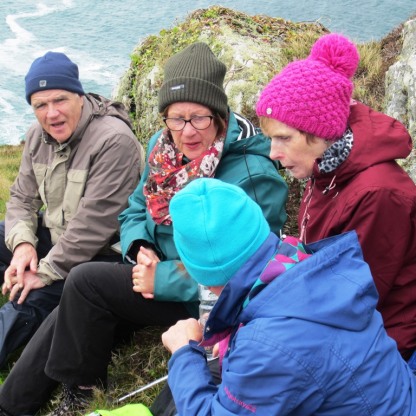 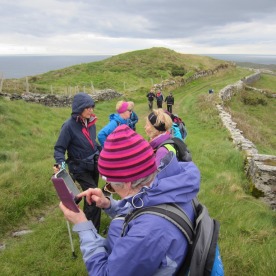 Thanks to Seán McCarthy for this recount of a wonderful visit to Lough Hyne and Cape Clear.  Thanks to all who sent photos of the trip.