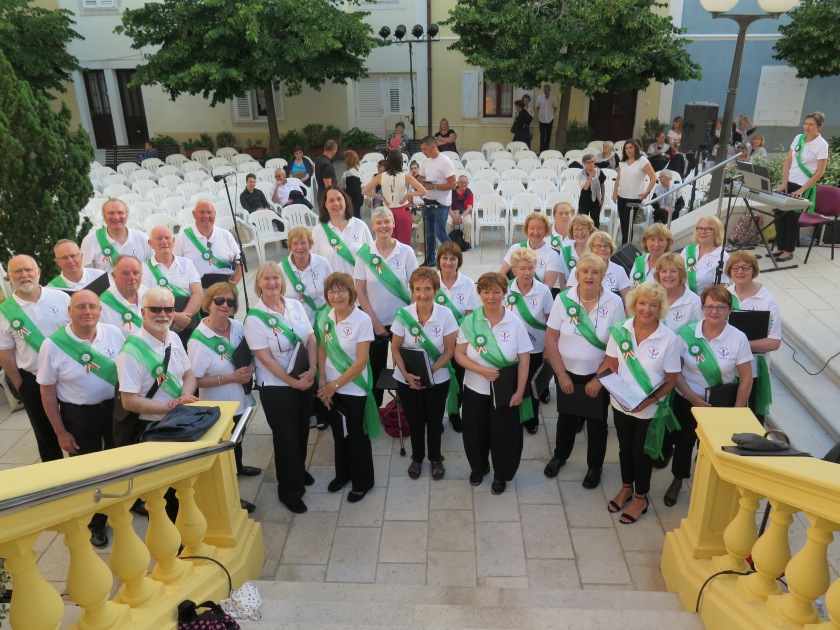 Following a very happy tour to San Marino in 2017, our choir felt their musical wings were up to further flight. To help whip us into shape Mary G. O’Brien, our conductor entered us for Féile an t-Samhraidh in Midleton with happy results: (a) We upped our performance, (b) We brought home two trophies.

Planning for a choral tour takes lots of tedious and often exhausting preparation. Mary Fitzgerald (our founder) made a great hand of much unseen heavy lifting.

Starting last September, the research, planning, saving and learning steered our course for the island of Krk, off the coast of Croatia.

Thirty singers, some guests, our conductor and Antoinette, our accompanist boarded Ryanair for Zadar, Croatia, on Wednesday 5th June. After a flight of 3 hours, and a bus trip of 4, we reached our island home, tired but energised for our adventure. Our hotel was in a perfect setting, within 3 minutes of a clear blue sea, most inviting at 18 degrees. The buffet meals catered exhaustively for all tastes. The hard working highly efficient staff might crown their C.V.s with a smile for guests and a bit of banter. The almost reverential hush of the dining room was subdued mood music to the more boisterous ways of choristers on tour.

The boss man in the dining room, a one-man “Checkpoint Charlie” seemed a two-ulcer man with a three-ulcer job. When some of us on occasion forgot our room card numbers, he seemed to wilt a little further each time.

The popular belief that singing is thirsty work came under pressure as our conductor exhorted us to abstain and mind our voices. Some despairing voices were heard to moan, “Are we a temperance choir?” Balance and moderation prevailed.

To plan an outdoor concert, months in advance, without fear of rain is a luxury we don’t enjoy in Ireland. Two local choirs joined us in the square of the little town of Omišalj. The applause was generous, and despite the difficulty of the local language for us, we found Ireland had a bigger profile than we expected. Sadly, Croatia has lost half a million of its 4½ million in recent years. Ireland it seems, has become the destination of many. The name of our city and their island, C-O-R-K and K-R-K was commented upon. Post-concert, informal singing and grub, Alen our excellent guide brought us on an “in-the-dark” tour of the town, his home. The late hour lent its magic to the lanes, buildings and spaces of a very pretty time-warped town.

For our second outing, we headed to the mainland, to Rijeka, Croatia’s third largest city. After practice, practice, practice we finally made it to Carnegie Hall, for that indeed was the venue as we sang for the Slovenian minority community in their club venue. The full hall, reminiscent of the “halla” in my own school, made us feel at ease. Trasna na dTonnta wooed them early in our recital, and we gave them of our best. Once again we were warmly welcomed and fed, and the unexpected connections with Ireland were explored. With one more public performance to come, we had an early night, but not before rearranging our music for our church performance the following day.

Krk Cathedral has been a space for Christian worship for 15 centuries with features that represent each milestone in that time span. We sang the Lord’s praises as Laidin, as Gaeilge agus as Béarla. The congregation were later our audience, immediately after Mass, and we gave them a short recital.

Afterwards, our parched throats led us to “Titanic”, a bar and pizza spot by the pathway that led from the walled town of Krk to our hotel. With no icebergs in sight it was a wise choice. Individual party pieces were let fly with impromptu harmony, giving soloists a supported, if rocky ride. With duty done, Monday beckoned, with a 5 hour sea cruise among the islands. Two swimming stops along the way made it the perfect post performance release. A special bonus was our sighting of a griffon vulture with its wingspan of almost 3 metres, and its demanding chick. Long may this endangered bird be free to float above us.

With the food so good and pounds being gained, we all resolved to be active on the long shaded walks in temperatures hitting 30 degrees, or spending more time enjoying the salty water experience. Further visits to “Titanic” called forth Plans B, and C, as no party piece was allowed a repeat. The growing sense of comradeship among the choir made it possible to enjoy any meal or outing with any random members and feel perfectly at ease. With our Euro worth 7 Kuna it was difficult to get rid of one’s spending money. We tried a little harder and just about managed to shed our “funny” money.

Then suddenly we found ourselves mentally packing and gearing up for the return trip. With little extra weight by purchase, may I now inform Ryanair that we may have boarded with extra carry-on weight!!!

Our Croatian driver loaded us up, and off we headed once more for Zadar Airport. Alternatively the most barren, rocky landscape could give way to lush growth and harvests to come. The stone walls of Connemara are works of art in comparison with the mounds of Croatian rock walls that speak of surplus of rock and lack of inspiration.

At the Airport, the greeting that our flight was delayed struck some as an overture to worsening bad news to follow. Thankfully we got away in just under an hour late. Once we landed in Dublin it took us a while longer to come down from the natural “high” of our trip. Yes, we are back, but our photos, recordings and especially our memories will keep Krk 2019 in a warm and special place in our hearts. 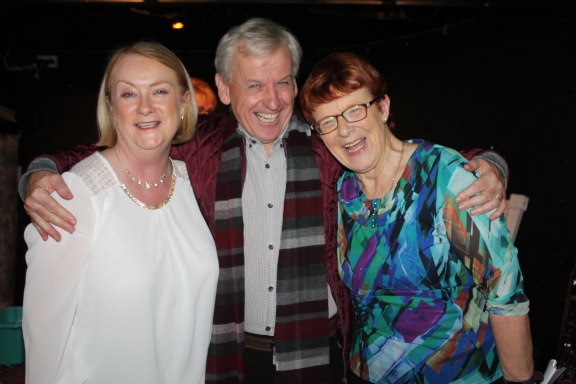 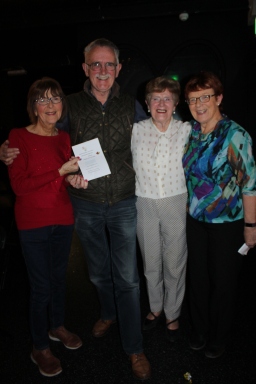 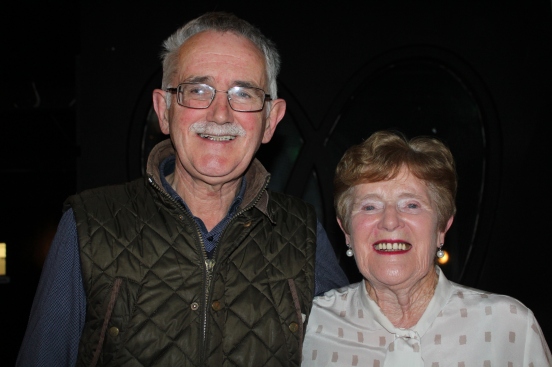 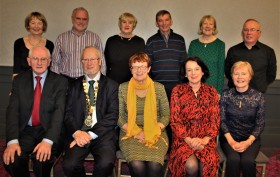